Work in the Alps is going very well. The project is pretty much there and it’s been a brilliant experience. Just one week to go!

On Sunday we got another opportunity to have a day off… so we woke to to find the wonderful view from our hotel room….

…had vanished and been replaced with a thick layer of snow and cloud. So what do you do when outside isn’t really an option? Well I had a good idea… chocolate factory anyone? :P

But more on that later. After the chocolate factory we went for a bit of a drive and accidentally ended up in Italy! How embarrassing :S It’s actually shockingly easy since there is a small bridge only 20 minutes drive from our hotel and it takes you straight there. We got some great snowy views from “the other side”:

After our minor excursion, we did the only other thing any salient tourist would do on a foggy day: go up the nearest mountain! Back up to the top of Mont Bré (which is the same place we went to a couple weeks before on the FUNicular railway…) however, this time the view was … different.

So that rounded off the day nicely :) But back to the matter at hand, which is always chocolate.

We went to Alprose, a chocolate factory in Lugano which makes some pretty good Swiss chocolate it has to be said. And no chocolate visit is complete without buying a few “samples” to “take home”:

I see it as an investment in my future :D

I may have to leave behind all my clothes, but I think it’s a worthy sacrifice.

And on that Chocólately bombshell, I shall say auf wiedersehen chow grazie mille

I love working for Sony!

I’m having a great time in Switzerland after returning to England for the weekend. Got to see the parents, but also a few friends back home I’ve missed.

The project is going really well and I am having the time of my life. Swimming, working and the views make this trip incredible. I would stay here forever if I could.

Lots of long days in the office, but my colleagues are a great laugh and the work is very fun and rewarding.

Christmas is just round the corner too!

This is one of those “my god I love my life” moments :D

It’s been a long week of work in Switzerland. Lots of progress, lots of issues, but also lots of fun. I’m loving every minute of Lugano. Switzerland is a brilliant country with great views (see below) and great food. After work, we tend to find a restaurant somewhere and we always get brilliant food: good pizzas are easy to find, but there are also some really unique meat dishes too. Yesterday I had pork stuffed with melted cheese… ces’t incrediblé!

And the room isn’t bad either :P

But it’s not all good news, the bad news is that this weekend there is a chocolate festival happening in the town centre by the lake. OK, so that’s not bad news at all! I can’t find a single bad thing to say other than I’ve been too busy to try the hotel swimming pool, but all that will change tomorrow morning.

This weekend we should be able to steal some time to act like tourists for a while, and we’re planning on taking a trip up the mountain in a cable car…

Ok, so October. I managed to make a big mess of October. Between readying myself for my trip to Switzerland and working lots of overtime other aspects of life suffered.

MADTV and house things fell by the wayside and it’s purely because work required a lot of my attention. And in my spare evenings I wanted to catch up with friends or sleep. By alas, life goes on…

There were 3 big events for me in October:

The first was Freshers’ Fayre with MADTV. I took a day off work and we went out in force to get freshers interested in their Student Television station. It was great to see so many people who had heard about MADTV and even already seen older videos! And we got loads of people signed up. The first meeting had over 50 people! It’s so great to see MADTV going places…

The second was Go Karting with work mates! Pedal to the metal and all out on the track was a great stress reliever, and getting to know more people at work was a bonus. The indoor track was huge and got plenty of laps in. Our team came 7 out of 8, but it’s the taking part that counts :P Hopefully doing this again soon :)

But the best moment of October, and my a far wack it has to be said, was Fright Nights at Thorpe Park! The yearly tradition got even better this year! A small group of us went and it was great to chill out and chat in the queues. But luckily the queues weren’t as bad as we expected and we managed to go in most of the mazes. This year, the horror mazes seemed to be much better than previously. And one maze in particular scared the bejesus out of me, something of a rarity these days. The company was a brilliant laugh, as expected when Heather, Lauren, Anne, Viv and Luke are involved. And I can’t really mention fright nights without saying that the Waffles and Ice-cream was the icing on the proverbial cake :D

So there you have it! November is going to be full of Switzerland banter I’m sure :D

Note: This post is filled with random pictures, un-associated with the text.

Finally back in Guildford for the weekend after being in Switzerland since Monday. I’ve said this before and I will surely say it again: Sony is an amazing place to work. Since I started working there in July I can safely say that every day I go into work with a smile, looking forward to what it has in store.

^ Blood Brothers: James came to Guildford a couple weeks ago. It was really great to see him! This will have to happen again!

Working in a large company such as Sony means there is always something to do, and the work I’ve been doing has not only been varied, but also relevant to my degree. In week 3 of placement I was given the opportunity to work on this project that would entail a trip to Switzerland… now that’s not a standard request! While the trip has been postponed several times, it’s finally happening. For me, it’s not so much the fact that I get to go to Switzerland, or the fact that I was asked to go; it’s the realisation that in the last few weeks I have become a part of the project team, not just a tag-along. And it’s that integration and appreciation that I’m most grateful for.

^ A couple of pictures from the “goodbye” meal I had last weekend before I left for Switzerland.

I’ve realised recently that, as a person, I strive to be part of a team, and for my input to be valued and appreciated. If I can be my own psychiatrist for a minute, I think this all stems from secondary school where I often felt alone. I know, cue the violin, but it’s given me a new perspective on a few things. For example, I never fully felt part of Stage Crew, and because video was always considered an afterthought, I didn’t see my opinions being taken seriously. That’s probably why I don’t do it anymore.

I don’t know whether it’s a sign of weakness that I only feel motivated when I know someone will appreciate my work, but I do know that I have immense pride in my work (such as videos, websites, reports, etc.) and while I appreciate constructive criticism, I can often take it more personally than intended.

^ Back in England. Did someone say party? (yes actually. Julie :P)

With MADTV recently, I’ve seen a divide between the committee and the team… And I know that last year’s team certainly felt that sometimes their effort wasn’t appreciated when reports were released late or not given as much promotion and care over as reports that committee were working on, even when it was. And I can see now how we could have communicated better, and I don’t want this years MADTV to go the same way. MADTV has had a brilliant start to the year, and it’s only going to get better and better. I just hope that the success of MADTV doesn’t jeopardise the team’s chance to learn through experimentation and have as much fun as we used to!

I don’t know where to start, but Switzerland is going amazingly. Lots of work, but it’s all really interesting. If there’s one thing I’ve learnt about Switzerland so far it’s that it is VERY expensive. 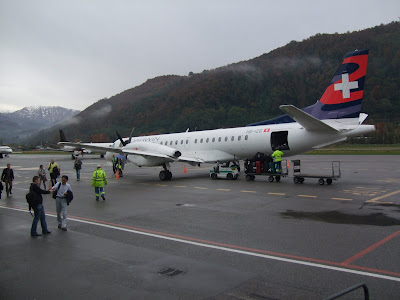 Here is the airplane that flies from Zurich to Switzerland. Double propeller, 50 seats. There is just enough time on the flight to get one of these… 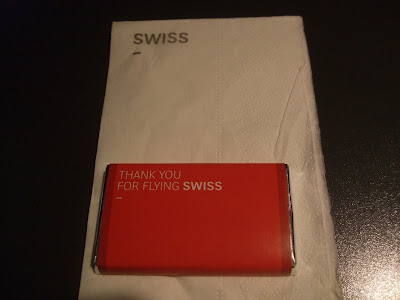 Complimentary on all Swiss air flights. This flying stuff ain’t so bad… 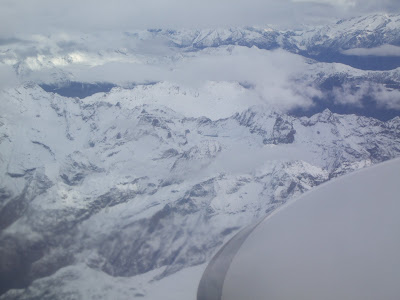 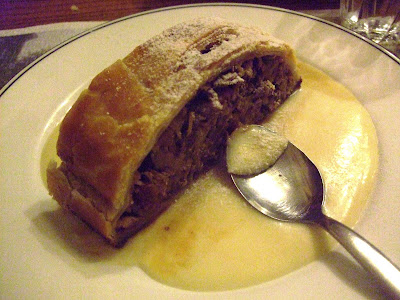 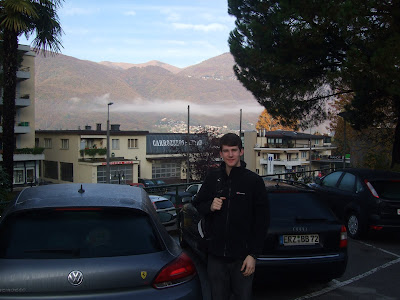 Outside the hotel this morning

I’ll get a proper update on here asap, but now it’s time for sleep. Night x