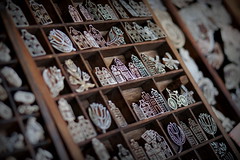 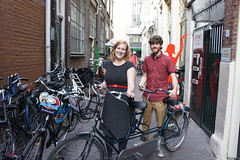 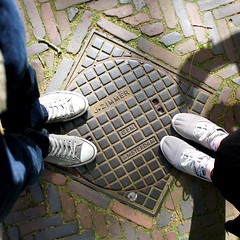 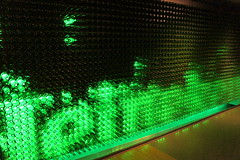 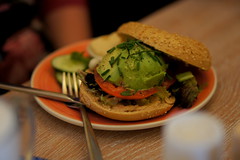 I have been very busy this week after having had a great weekend celebrating my 25th Birthday. On Friday night, my Dad came over and Emily cooked us all an amazing tofu curry. Having never had tofu, my dad was curious, but really enjoyed it!

I got a load of cheeky presents from my parents, including a children’s music CD with 8 songs about how to get dressed, going to the park and going to bed, all where the singer sings my name in all of them! Classic mum :)

Emily got me an awesome travel cover for my ukulele, a really interesting book about the history of design on the London Underground (she knows I’m a massive geek) and a new rubix cube to play with that’s taken me a while to wrap my head around!

Still takes me about 10 minutes to solve, but I’m getting there!

Then on Saturday, we went wakeboarding, my second attempt. And it was a great success! I managed to not only wakeboard, but get all the way to the first corner without stacking it! Next time I’ll try to actually make it round the corner!

In the evening, 23 of my friends and I went for a curry, then headed to a roller disco. Everyone got the hang of skates really quickly, and I enjoyed skating around together with so many people I knew. The last few years I’ve been restricted on numbers for my birthday party, because of the size of my house, so going out and having so many people show up was a great way to celebrate. Needless to say that after roller disco we got a few drinks in, the less said about that part of the evening the more accurate my account of it will be.

I’ve now been writing this blog for six years! And I hope you’ve enjoyed reading as much as I have enjoyed writing here. Who knows what the next six years will bring, but if one thing is certain, it’s that I should expect the unexpected.

On Saturday I will be celebrating my 25th Birthday by eating curry and roller-skating. By way of gearing my self up for my next quarter of a century alive, I’ve taken a look back at 25 things I’ve done in the last 12 months that have been absolutely amazing. See, I’m not getting old…

8. I don’t have a picture for the next one, but filling an entire row in the cinema to watch The Hobbit 2 with all my mates!

13. Another Postgrad event was the pub quiz! I wrote an impossibly difficult connections round where the answers to all the questions were linked. I hope I get to write more pub quiz rounds in the coming year.

May the next 12 months have just as many happy memories.

Today is the last day of my VIVA! 30 day vegan challenge. For the last 30 days I’ve eaten no animal products: meat, fish, milk, eggs or dairy. Why on earth would I do that? Well, for two reasons. First, I want to see if I can feel healthier eating a vegan diet – since I don’t need to lose any weight, this means feeling more energetic and focused during the day, and sleeping better at night. And secondly, I want to try new foods – something other than fish and chips, spaghetti bolognese and curry.

I decided to give this ago after I learnt that a few celebrities who cross my radar are vegan or vegetarian. John Bishop’s recent BBC documentary where he visits Australia shows him going to a crocodile ‘conservation centre’ where they kill the animals they are conserving to make purses and shoes and call it ‘conservation through commerce’. This made me think – do I want to be supporting that kind of business? He then later visits a ranch where the owner thinks less of him because he doesn’t eat beef. Why is it considered ‘not manly’ to be vegetarian?

Russell Brand talked about the horrible state of the food industry, summed up by the horse meat scandal last year. Do I know what is in my food, and is it an industry I can trust?

Jason Mraz has been another huge motivator for me. He has his own avocado ranch for heavens sake! He only eats raw plant-based foods and he seems to be doing all right.

The simple fact is that I was curious about a vegan diet and wanted a free ticket to vegfest so I didn’t have to pay £6 to go with my girlfriend. So I did it. And in true Instagram-style, here’s a selection of things I ate:

So what have I learnt? Well, I’ve learnt that most of the time other people seem to cook for me!

But seriously, I don’t see the point in cooking a meal for one, so I love to cook with other people, and when that happens I usually end up doing the washing up and letting them get on with the cooking. But, over the last month I have made some very successful potato curries and lunch wraps/sandwiches (I hope Emily would agree). I’ve also learnt how to make guacamole recently, a skill that I use as much as possible because avocados are amazing!

So now it’s the end of the challenge I need to decide if I’m going to return to my meaty past or not. And the conclusion I’ve come to is that I will continue not to buy meat or dairy products for my home cooking, but still occasionally eat meat at restaurants if I’m out with friends. I’ve never been a big fan of milk, and soy milk in tea, on cereal and in mash is just as good as milk, cheaper and has a longer life.

Very few restaurants cater for vegans or vegetarians very well, despite the fact that there are thousands of things they could make with just minor changes to the ingredients they use in other dishes – use egg free mayo, soya butter, soy milk. Emily and I visited a vegan afternoon tea place in London and it was honestly better than a traditional afternoon tea. Simple changes to recipes make them vegan, it’s not hard.

In terms of beer and other alcohol, that is something I’ve found too difficult to follow. It’s too hard to know for sure if a drink is vegan or not that I won’t be sticking to that side of vegan-ism just yet. Even with the Barnivore app, local ales and ciders aren’t listed, and it’s an industry I want to support and continue to explore.

As for chocolate – bourbons are vegan, and so is dark chocolate; and now I have my free Vegfest ticket, I’m sure they’ll be some sweet stalls there just waiting for my taste-buds approval…