Since the University of Surrey’s Student Television Station re-brand over the summer from MADTV to StagTV, I have been involved in various projects.

Firstly, we had a major project to inform new students about everything they would need to know about the university, Guildford, societies and moving in. It was a big effort, with planning starting way back in March with me as the Producer, but as production began I got less involved due to my work commitments (and month away in California!) Nevertheless, I was still able to get my hands dirty by editing a video about chilling on campus and another about the Surrey Sports Park. It’s always weird editing work that someone else has filmed, but since these videos were well laid out with plenty of extra library footage to fill them with, I managed to get something I was happy with. I also featured as a student giving tips to freshers in this video… still makes me cringe.

Once the year had begun and new blood had joined the team, I was made producer of a new series we’re calling Get Involved (GI). The basic premise is to have a presenter try out a sport or society that is active on campus and get an insight into what people can expect if they decide to get involved themselves. As a pilot I presented and edited a GI about the Mountaineering Club, since I used to be a member a couple years ago. You can watch the result above. Since then there have been two further Get Involved episodes, one of which I also directed and edited about the Music and Drama society. There are four more GI’s in the pipeline for release early next year, and I’m aiming to make the videos more presenter-led and less video-to-music focused. If you have any comments about any of these videos then I’d love to hear them.

I’ve also just finished work on a short sketch/advert that is very different to the factual documentary/news style shows I’m used to producing… so watch out for that in the coming weeks.

Beth arrived on Saturday! Took her on a very long route back to the house via other people’s houses for breaks. In the evening we went out to Old Orleans restaurant for dinner. There were 9 of us in total and we had a great time. After dinner we went for drinks in town and I got to finally go in Fahrenheit 55, which is a really nice bar in Guildford. Will definitely go there again, it had a great atmosphere.

On Sunday Beth and I chilled in the house in the morning before taking Beth back to the train station. In the evening it was time for Monopoly.

If you remember back to last fresher’s week we can take this except from my blog:

So this is now officially a tradition. This time we upped the anti from 11 people to 18. But we had a bigger room this time. It was good fun. We had Chinese and maybe cheated a little…

Either way it was a good night. Looking forward to our next games night, Cranium!

Only had one lecture, but I did a lot of reading about the course and what I’ll be studying this year. Most of it sounds really interesting, so we’ll see how long that lasts…

Sorry I’m being quite brief today, but I have so much to say being vague is the best way to go!

Finished off the day with the Stage Crew Fresher’s Meeting, got about 30 fresher’s this year, so all looks good!

Tomorrow I only have 1 short tutorial and I’m free the rest of the day. Love these slow starts… eases me in slowly.

MAD TV stuff is boiling over in the background too, got that on the go when I can.

Ice skating on Thursday was fun. About 20 of us went in the end. I was the only non-chemist there, but then that’s what you get when you gate-crash a ChemSoc event! After skating we went to Nando’s and I claimed a free 1/4 chicken! I ate very well that day :)

After Nando’s I broke from gate-crashing with ChemSoc to gate-crash someone’s birthday in Channies. I don’t know them as such, but pretty much everyone I know knows him, so I think it’s justified. To be honest, I didn’t have a good time. There were lots of people there who I didn’t really know and I had a lot of “stuff” on my mind. I left at about 11:30 with Mike and walked home.

Once home me and Josh took it upon ourselves to undertake the mammoth task of washing up… everything. 2 hours later we’d finished. If nothing else it was fantastic to talk to Josh and catch up.

Yesterday was very cool. I had a meeting with MAD TV in the afternoon about filming our next episode and stuff, which made me realise how crazy busy I’m going to have to work this year…

After that Josh and I went to Wetherspoons in town to claim a beer and a burger with chips for £3.99. That’s all the convincing we needed. After chocolate fudge cake for dessert we headed over to Channies for another pint (because we could, and, technically, it was on our way home…)

Josh left me on my own to go to foam party. I was nervous about not meeting anyone in there, but that was shot when I bumped into Nick and Ollie as soon as I walked in. Then I met Laurie, Chris, Joy, Vicky, Adam, Becky, Jack and Emma and I knew I was sticking around. All in all a very, very, very good night.

PS PICTURES! (I might need to start screening and vetting these soon…)

Sozies, lets crack that whip and let you peeps know what I’ve been using my time doing the last 3 days.

Monday can be summed up in 2 words: Stage Crew. I worked all day setting up an elaborate video rig for the DJ night that evening. We had 2 pit cams and 3 other cameras. It was crazy fun and I hope to do it again soon.

Tuesday was a completely different kettle of fish. After being awoken only a few hours into my precious sleep by a text I was quite tired the whole day. Went to the library with Sophie to help her buy internets for her house. After bumping into Lauren and talking to her for a bit I headed off to Tesco with Phil. Stocked up on cider :)

When I got back I got to speak to Josh for the first time in ages while I made my dinner (tuna pasta if you must know) and then had to dash off to go to comedy night in Channies (remember, student bar, yea). That was a good night, the comperé was a bit weird but the acts were good.

On Wednesday (once again after getting ridiculously small amounts of sleep, mainly my fault for talking on the phone too long) I went in to help Stage Crew setup for Fresher’s Fayre and Calvin Harris in the union that night.

Turns out that there had been a water leak to the main feed that supplies campus and the whole east side of campus was without water. This meant that unless the problem was fixed, the union would not be able to open that night for the gig. Not keen on the idea of setting up for a gig that might not happen, and one that I hadn’t signed up to do either, I met up with a load of people at Fresher’s Fayre and wandered around there for an hour or two.

Then we went back to Sophie’s house, because it’s just off campus, and had tea! One of the things we got at the fayre was a free 7” pizza from dominoes. So we went. You can imagine the queue was quite big and we had to wait a while to get our pizza’s. But when something’s free, you have to expect a mass of students to appear.

After that went back home to get changed and then headed back to Sophie’s and headed off to Channies with Sophie, Phil and Julie. After a drink in there we went to the union for the Calvin Harris. I was quite excited about this one…

To summize, the night went very well. Calvin’s set was a bit meh, but the rest of the music really made up for it. I saw L.O.A.D.S of people I knew and got talking a bit more to a few people I’d met from the last few days. It was a great night and I’m glad I didn’t miss out by doing stage crew.

To top it all off I had a good nights sleep last night. Feel very refreshed and ready for a new day! Ice skating this afternoon with ChemSoc :)

Speak to you all soon. Loves, Charles

PS plenty of pictures are on there way, don’t worry :)

And so it begins…

after a day working at Ascot on Saturday, in the evening Julie and Sophie came to my house for dinner. It was a good laugh.

Then yesterday I spent the morning being a fresher’s angel and got to move lots of tiny fresher’s into their rooms, it was really exciting!

In the afternoon I setup video in the union of the big opening night. Didn’t go exactly as planned because their weren’t a lot of people to help out. During the gig I was only needed for a small part of it, so I spent most time with my various groups of friends clubbing. I had such a good time, and it felt sooooo good to be back in the union again. I love it! And seeing everyone again! And hearing all the summer anthems bring played! Such a contrast to the awkwardness I remember from last years first night for me.

Spent way to long packing down the gig once it had finished and then got very little sleep. And here I am. Ready to do it all again today. More video to setup and more people to meet. It’s going to be the craziest week of my life. No doubt. And I’m loving every millisecond of it!!!! 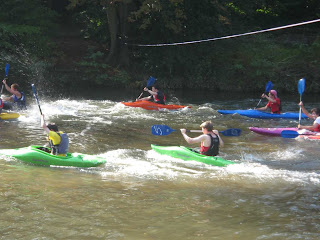 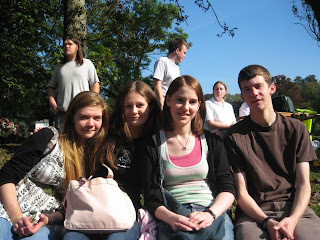 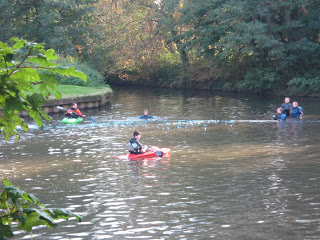 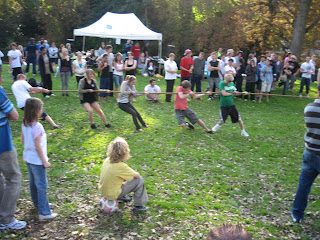