Try and wrap your head around that title!

This is the second half of the 4th part of a multi-part series on the fight for second year accommodation. If you’ve forgotten where we left off, I don’t blame you, so had I. Basically we’d just seen a house none of us really liked, and were on our way to the next house…

The second house was on Hornbeam Road and turned out to be AMAZING! The rooms were HUGE, we came up with: 1 triple room, 1 large double room, 2 normal double rooms/large single rooms and a small room. However, the house was being renovated, as in they were still building the kitchen and hadn’t finished any rooms yet (although the rooms upstairs were nearly there). Here are some pics:

One of the double rooms

So we were quite excited and rang the landlord to get the house. But guess what, yup, it had gone. And not only that but it had JUST gone. He’d just that second got off the phone with the other group. Sad faces attacked us from inside.

That night I rang a lot of landlords who had 5 bedroom houses only to find that they had ALL gone. I gave up at 8pm and rang home.

Dad gave me the willing to go and and I tried a few more landlords before I went to bed. The miraculous thing was that the last 3 landlords I rang ALL had a house still available. Result! So I began to arrange viewings for the next day…

Wednesday came around (this is the 25th February for those interested in how slow I am about revealing this information) and I rang a few more landlords before going to my lecture.

The first (a good 25minutes walk away) was alright. Essentially a 4 bedroom and a closet. So we moved on. 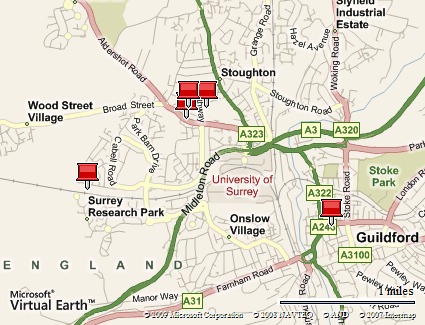 The second house was amazing…

And we’ll have to leave it there for now folks. Join me again next time as we conclude the story of the great accommodation race, with a post titled “Zion”.